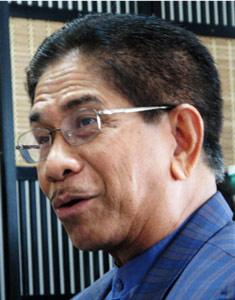 Mr. Mooy began his professional career in 1958 in the Faculty of Economics, Gajah Mada University, Yogyakarta, Indonesia, as a Teaching Assistant before continuing his graduate studies at the University of Wisconsin, USA from 1959 to 1965. In 1967, he was appointed Head of the Bureau of Statistics, State Ministry for Economic, Financial and Developmental Affairs, Indonesia. From 1968 to 1969, he served as Head of the Bureau of Domestic Finance, National Development Planning Agency (BAPPENAS).

Mr. Adrianus Mooy assumed the post of Executive Secretary of the Economic and Social Commission for Asia and the Pacific (ESCAP) on 1 April 1995.

Prior to his appointment, Mr. Mooy was Ambassador of Indonesia to the European Communities in Brussels since 1993. He was Governor of Indonesia’s Central Bank, as well as the Governor for Indonesia of the International Monetary Fund, since 1988. In addition, he was the Asian Development Bank’s Alternate Governor for Indonesia, as well as for the Multilateral Investment Guarantee Agency in Washington, D.C., during the same five year period.

From 1969 to 1973, Mr. Mooy worked as Economic Affairs Officer at the UN-ECAFE, Bangkok before going back to Indonesia and served as Deputy Chairman for Fiscal and Monetary Affairs, National Development Planning Agency until 1988. Concurrently, Mr. Mooy served as Assistant for Monetary Affairs to the Minister Coordinator for Economic, Financial and Industrial Affairs (EKUIN) from 1978 to 1983; as Executive Secretary of the Monetary Council from 1983 to 1988; and as Assistant for Development Finance to the State Minister for National Development Planning, Indonesia from 1985-1988.

Mr. Mooy served as a member of the Indonesian People’s Consultative Assembly from 1982 to 1987 and from 1987 to 1992. From 1987 to 1993, Mr. Mooy was a Professor of Economics at the University of Indonesia in Jakarta.
He has been a member of the Indonesian delegation to many international conferences, among them, those within the framework of the Association of South-East Asian Nations (ASEAN) Economic Cooperation, the United Nations Conference on Trade and Development (UNCTAD), the Non-Aligned Movement, and the Intergovernmental Group for Indonesia.